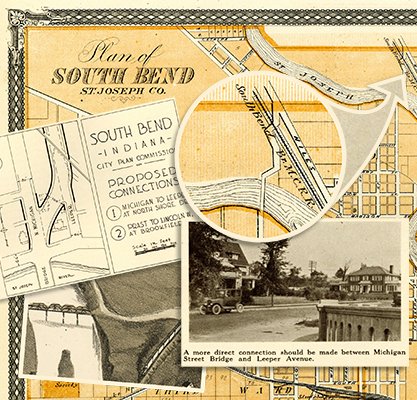 South Bend’s early history is defined by the confluence and intersection of transportation: by river, by train, and by road.  Rivers, rails, and highways provided ready access to power and natural resources, faraway markets for the sale of manufactured goods, as well as leisure in the form of entertainment and excursions.  The manufactories founded along these routes created products and employment, while residential neighborhoods, parks, and educational institutions were established between them.  Titans of industry negotiated with both State government and the City of South Bend to ensure networks of communication and commerce were consistent and uninterrupted.

The northern approaches to the City of South Bend contain natural topography and geography that result in what came to be known in the early 20th century as “The Bottleneck”, leading to massive infrastructure improvements to overcome it.  These bridges, viaducts, and paths continue to be used today, conveying people and material from one place to another.

South Bend’s Historic Preservation Administrator Adam Toering will talk about the development of the near north side of South Bend, the establishment and construction of bridges across the St. Joseph River, the routing of rail to connect industrial manufacturing including how those routes both encouraged and limited development by creating ‘the Bottleneck’, and how that legacy continues to impact the city’s growth today.

Your ticket for the: South Bend’s Bottleneck – Where River, Rail, and Road Crossed Paths