Close
The Beetle and Tante Kiki

The Beetle and Tante Kiki

My mother is from Breslau, Germany.  She had a privileged youth growing up in the 1920s and ‘30s: she had a governess, house keepers and long summer vacations on the Baltic sea.  And her father, George Skiebe, my Opa, had a car collection.  He had a Mercedes 540 and a Horsch, but he loved American cars.  He had a Chrysler, a Ford sedan and a Ford pickup.

That all changed during World War II.  By the time the war ended, the Skiebe family escaped with their lives but little else.  In the 1950s, my mom and Tante Kiki, my aunt, immigrated to the United States, took their citizenship test and began new lives as Americans.

When each of them were able to buy new cars, not surprisingly they bought VW Beetles.  Thanks to my grandfather, these two women were car enthusiasts, and even though they couldn’t afford expensive cars, they could afford Beetles.  My mom and dad had a 1958 beige Beetle and my aunt drove a light blue model.  I can remember how excited everyone was when we went to the dealership to pick them up!  I was four.

In the mid-1960s, my aunt decided to move from the New York City area to the West Coast and drove her blue Beetle cross country.  I remember she told me that when she drove across the deserts on long stretches of straight roads, she would tuck in behind a large tractor-trailer truck and “it would just pull me along.”

As a 10-year-old, I was skeptical.  How could a truck tow my aunt’s car without a rope?

Decades later, I became involved in NASCAR racing in public relations and marketing.  I learned from veteran race drivers like Darrell Waltrip, Bobby Allison and Dale Earnhardt, Sr., that there was indeed something called “the draft,” where the vehicle in front would clear the air, thereby allowing the car behind to work less.  And go faster.

Still, it sounded like black magic to me.  Until I ran my first marathon.

It was a calm day without a breeze when I was running the Charlotte Observer Marathon about 20 years ago.  As I ran through the city streets, I followed another runner closely.  When I moved to the left or right of that other runner, the air was “rougher” than when I followed directly behind.

Today, my mom is 93 and Tante Kiki is 89.  They both live in nursing facilities and neither is able to drive any longer.  But both are still car enthusiasts and both love to remind me about the adventures they had in their VW Beetles.  And I have a 1960 Beetle in my garage as a reminder of my family’s love affair with the brand.

Thanks, Tante Kiki, for teaching me about a basic racing practice you learned in your 36-horsepower VW Beetle.   It just took me a few decades to understand it. 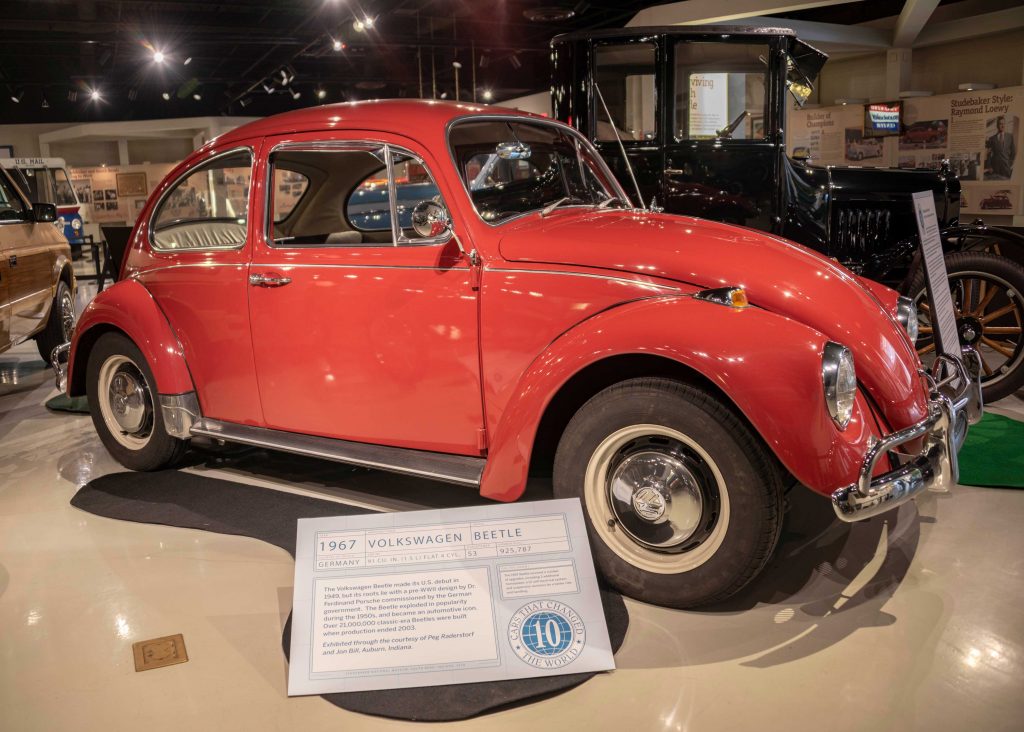 About the Author
Tom Cotter is an acclaimed automotive author and historian specializing in “barn finds”  and vintage racing.  Tom is a regular contributor to Road and Track and the New York Times, and recently published, “Ford Model T Coast to Coast – A Slow Drive Across A Fast Country” chronicling his cross-country trip in a Model T. He is the proud owner of a 1952 Cunningham C3 Coupe, a 1939 Ford “Woodie” Station Wagon and a 1965 Cobra.

About the Series
This series of essays explores the vehicles that made up our Ten Cars that Changed the World exhibition.  The exhibition was a partnership with the Society of Automotive Historians.

Your ticket for the: The Beetle and Tante Kiki

The Beetle and Tante Kiki