Close
Studebaker at the Brickyard

Studebaker at the Brickyard

August 7, 2020
Special ExhibitionsStudebaker at the Brickyard

The Indianapolis 500 is considered by many to be America’s greatest racing spectacle. Many legendary names have competed on the 2.5 mile oval on Indianapolis’ west side. In the early 1930s, the Studebaker Corporation entered the Brickyard fray.

Through much of the 1920s, the ‘500 was dominated by expensive purpose-built race cars. In fact,Studebaker sponsored one such entry in 1924. Increasing costs led to fewer and fewer entries as the 1920s progressed, leading race organizers to enact drastic rule changes for the 1930 contest.  The new rules outlawed superchargers, increased maximum engine displacement from 91 to 366 cubic inches, and reinstated the riding mechanic. The rule changes encouraged the use of production-based engines, such as the Studebaker President’s 336.7 cubic inch inline eight.

Two private parties entered the 1930 race with President-powered race cars. The “Russell 8” was constructed by Detroit-based Russell Snowberger, and the “ROMTHE Special” was built by a group of Studebaker engineers. The ROMTHE Special (named for the initials of its builders) retired on the 112 lap due to a ruptured fuel tank, but the Russell 8 finished an impressive 8th overall.

The two cars returned for the 1931 ‘500, this time joined by a third Studebaker-powered entry, the “Hunt Special.” The car was named for and built by Studebaker’s Supervisor of Testing George Hunt. The car was not officially sanctioned by Studebaker, but was built at Studebaker’s facilities as an “off books” project. The Hunt Special was very similar to the other two cars, but featured a chassis built by noted Indianapolis race car builder Herman Rigling and certain other detail differences. As for the race itself, The Russell 8 grabbed the pole position and finished 5th, the Hunt Special briefly held the lead before crashing late in the race, and the ROMTHE Special renamed the Richards Special for 1931, also crashed near the end of the race. 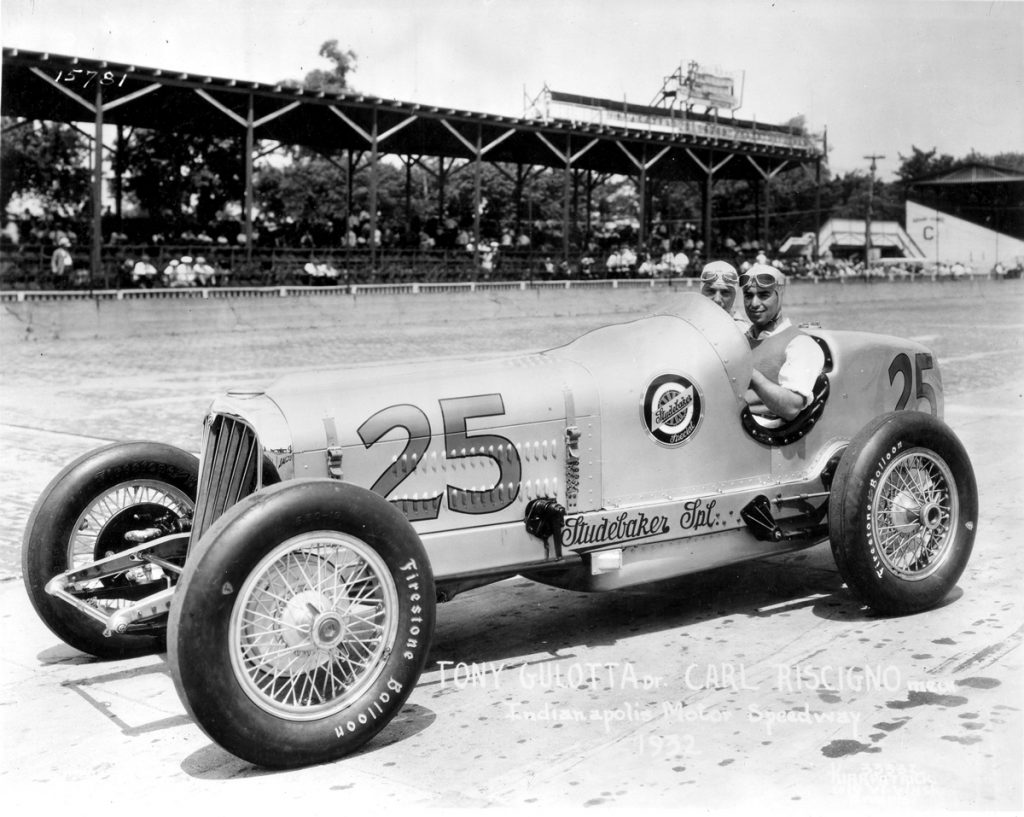 The success of the Studebaker-powered racers in 1930 and 1931 led to a full-fledged factory backed effort in 1932. Using the Hunt Special as a template, Studebaker built four additional racers for the 1932 race and fielded a five-car team. All five cars finished the race, with the #22 car driven by Cliff Bergere finishing a team best 3rd. The Studebaker team returned for 1933 with four of the cars featuring new streamlined bodies. The #34 car driven by Tony Gulotta finished a team best 7th, and the lowest finish was a mere 12th.

The 1933 race was the last Studebaker race at the Brickyard. The company entered receivership in March of that year, and its racing program was a casualty of its financial situation. The Studebaker team cars were sold off, although some continued to compete privately at the ‘500 into the late 1930s. All but one of the factory team cars is accounted for today.

Your ticket for the: Studebaker at the Brickyard

Studebaker at the Brickyard