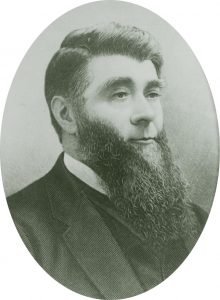 Peter Studebaker was born April 1, 1836 in Ashland, Ohio. He was the second youngest son of John C. and Rebecca Studebaker’s thirteen children. He moved to South Bend in 1852 and took work in a dry goods store for $15 per month. He started his own business a short time later, and in 1856 moved to Goshen, Indiana to open a retail establishment with his brother-in-law Phillip Welch.

In 1860, Peter Studebaker became a dealer for his brothers’ wagon business, and in 1864 formally joined the company. He was placed in charge of sales, and immediately went to St. Joseph, Missouri to establish a Studebaker retail branch. The St. Joseph branch proved very successful, as it was the “jumping off” point for settlers heading west. Peter returned to South Bend in 1872.

Under his leadership, the Studebaker Bros. Manufacturing Company Sales Department opened many other branches around the country, including its Chicago Repository that still stands today. Peter personally selected the building’s Michigan Avenue site, and would become a semi-permanent resident of Chicago for nearly ten years. He maintained a home just north of downtown Chicago on Prairie Avenue and later had an apartment at the Repository.

Peter Studebaker married Dora Handley in 1856, and together they had three children, Wilbur, Mary, and Dora. Ms. Handley passed in 1864, and in 1865 Peter remarried to Ms. Alice Woodbury. Their marriage unfortunately ended with her death in 1869. He married again in 1871 to Ms. Mary Alice Gunthie.

Politically, Peter Studebaker was a stanch Republican whose counsel and opinion were widely sought. He devoted two months to campaign for James Garfield’s 1880 bid for the White House. A longtime admirer of Abraham Lincoln, he read every article and story on Lincoln that he could find. Upon learning that Lincoln’s mother’s Spencer County gravesite was unmarked, he forwarded the necessary funds erect a proper marker.

Although not an active church member, Peter was an Episcopalian and contributed to the construction of South Bend’s Episcopalian church. He was also a supporter of the Waif’s Mission in Chicago, and a member of the Northern Indiana Historical Society’s executive committee.

A diagnosis of heart disease took Peter Studebaker to Alma, Michigan in October of 1897 for rest and treatment. J.M Studebaker accompanied Peter on the trip, and was at his bedside when Peter died just before noon on October 9, 1897. He is buried in City Cemetery in South Bend.

Your ticket for the: Meet Peter Studebaker