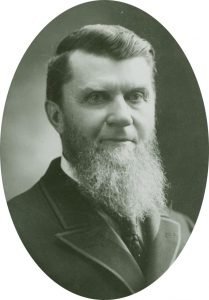 John Mohler “J.M.” Studebaker was born October 10, 1833 in Adams County, Pennsylvania. His family moved to Ashland, Ohio, when he was a small boy, and like his brothers Henry and Clement he learned the blacksmith and wagon making trades from his father.

He arrived in South Bend in the winter of 1852 and took work cutting wood, chopping up to two cords a day. In 1853, J.M. departed for California to prospect for gold and arrived in Hangtown (Placerville) California five months later. Once out west, he took work with Madison, Indiana native and blacksmith H.L. Hinds making wheelbarrows.

By 1858, J.M. had amassed $7,000 from his wheelbarrow sales. He returned to South Bend and bought out Henry Studebaker’s share of the family firm. J.M. spent much of his time managing the wagon-making side of the business.

On January 2, 1860, J.M. married Ms. Mary Jane Stull. A planned honeymoon trip to Chicago was cancelled due to extremely cold weather. Instead, the young couple honeymooned in Goshen with Peter Studebaker and his wife. J.M and Mary had three children, Lillie, Grace, and John Mohler, Jr.

J.M. owned significant amounts of land in and around South Bend. His Sunnyside farm on South Bend’s east side spanned many acres and was home to his mansion of the same name. In civic affairs, J.M. took an active interest in promoting and growing the area’s parks system. In 1889, J.M. approached the city of South Bend with an offer of riverfront land near the present day Indiana University-South Bend for park use. South Bend’s Howard Park benefited from both cash and land contributions from Mr. and Mrs. Studebaker, and in 1906 the family underwrote the $25,000 cost of Howard Park’s new fountain. South Bend’s YMCA received a new home in the early 1900s through the generosity of J.M. Studebaker, who contributed funds for a new building in memory of his brothers. The brothers were long-time supporters of the “Y.” Clement Studebaker was its first president, and the first organizational meeting was held at J.M. Studebaker’s house.

Although raised as a Dunkard, in his adult life J.M. Studebaker was a Presbyterian and freely gave in support of his congregation. His helped fund construction of South Bend’s First Presbyterian Church, which still stands at the corner of Washington and Lafayette streets.

J.M Studebaker lived to 84 years of age. In his later years he was named Honorary President of the Studebaker Corporation, and went into the office nearly every day until his health no longer allowed. John Mohler Studebaker passed away at his home on March 16, 1917 at 11:00 p.m. He is buried in Riverview Cemetery in South Bend.

Your ticket for the: Meet John M. Studebaker