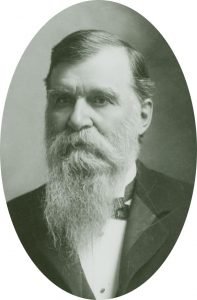 Clement Studebaker, the second eldest son of John C. and Rebecca Studebaker was born March 12, 1831 in Adams County, Pennsylvania. At age four he moved with his family to Ashland, Ohio, where he learned blacksmithing and wagon making from his father.

In 1850, Clement moved to South Bend, Indiana and took work as a school teacher. He taught two terms in the Palmer School and also assisted in a threshing machine blacksmith shop. In February of 1852, Clement and his older brother Henry opened the H. & C. Studebaker blacksmith shop in downtown South Bend. Both brothers worked capably at the forge, and Clem also handled the bookkeeping. When the remainder of the brothers joined the firm, Clement took the title of President which he held until his death in 1901. In October of 1852, Clement married Ms. Charity Bratt. They had two children, both of whom died in infancy. Ms. Bratt died in 1863, and in 1864 Clement remarried to Ms. Anna Milburn, daughter of Mishawaka wagon maker George Milburn. The couple had three children, George, Anne, and Clement, Jr.

In addition to serving as President of the Studebaker Brothers Manufacturing Company, Clement held interests in many other local concerns, including the Mishawaka Woolen Mfg. Company, the South Bend Malleable Iron Company and the American Malt Cream and Drug Company. Politically, Clement Studebaker was an ardent Republican. He served as a convention delegate in 1880 and 1888, and was an oft-rumored candidate for governor of Indiana. President Harrison appointed Clement to serve on the Pan American Congress in 1889. Locally, he served on the South Bend City Council and the St. Joseph County Council.

Clement was an active member of the Methodist Church, representing Indiana at several Methodist conferences and also underwriting the construction of St. Paul’s Methodist Church. Mr. Studebaker was a also a Knight Templar Mason and an Oddfellow. He served as trustee of Indiana’s DePauw University for twenty years. The school’s administration building is named in his memory. South Bend’s Memorial Hospital traces its roots to the late 19th century when Clement and Anna Studebaker gave a plot of land and a sizable financial guarantee towards the establishment of a medical facility.

Clement suffered from stomach ailments and anemia through much of his adult life, and frequently took trips to benefit his health. In the fall of 1901, upon the advice of Andrew Carnegie and J.P. Morgan, he traveled to southern France for rest and relaxation. His health momentarily rejuvenated, he returned to South Bend in late September. His recovery was short lived, however, as his anemia returned. Clement Studebaker died November 27, 1901 at 1:45 in the afternoon. He is buried in Riverview Cemetery in South Bend.

Your ticket for the: Meet Clement Studebaker